RAYE MONTAGUE
Photo Credit: Brown vs. Board of Education
Click on images to enlarge

Brown v. Board of Education

Ms. Montague faced many of the same racial conflicts that the Brown family faced. Linda Brown was forced to attend Monroe School, an all black school five miles from her home, rather than attending Sumner School, an all white school only four blocks away.  The Brown family took action to change the Separate but Equal segregation law. The  suit combined the Brown's case with four other cases which turned into the Brown v. Board of Education case. In 1954, the Supreme Court ruled unanimously that racial segregation of children in public schools was unconstitutional. Unfortunately, this case did not settle desegregation overnight, but added fuel to the Civil Rights Movement. With  segregation still being in effect in Arkansas Ms. Montague  wasn't allowed to attend the university of her choice.

One year ofter Ms. Montague graduated college, in 1957, in Little Rock, Arkansas  there was a huge protest. It was known as the Little Rock Nine. Nine African American students were selected to go to Central High School, an all white school. The nine students were restricted from going into the school by the national guard.  President Eisenhower had to take the national guard out of state control and send the 101st Airborne Division to protect the nine students from the angry protests. This all happened only 44.3 miles from Pine Bluff, where Ms. Montague attended the all black Merrill High School. 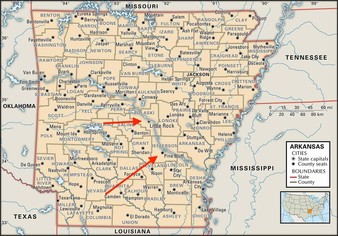 "At one point an elderly black man in a blue and white Chevrolet drove up Fourteenth Street along side Central High School. Suddenly all of these white parents surrounded the car and started yelling. I was so afraid they were going to turn the car over with the elderly black man in it. I honestly believe that had the parents stayed away, there wouldn't have been a problem. The whole thing was their insistence, we were all thinking, Well, we're just doing what our parents want us to do. We almost felt like we didn't have a choice; we had to get out there and protest."
​(Quote by Anne Thompson)
Photo Credit: The Century for Young People (book)